I got back home from Lawrence, Kansas, last night, badly hungover from a raucous evening of a group reading of “The Eye of Argon” (Thank you Andrea.) This included drinking whenever we heard the word “wench,” which turned out to be way too often. It was one of the most “writer’s group” moments of the two weeks and a great note to end on. We were just getting to know each other, so I suppose the next step would have been disagreeing and forming cliques and we simply didn’t have the time for that. “Leave the party while you’re still having fun,” my grandmother said, and she was absolutely right! 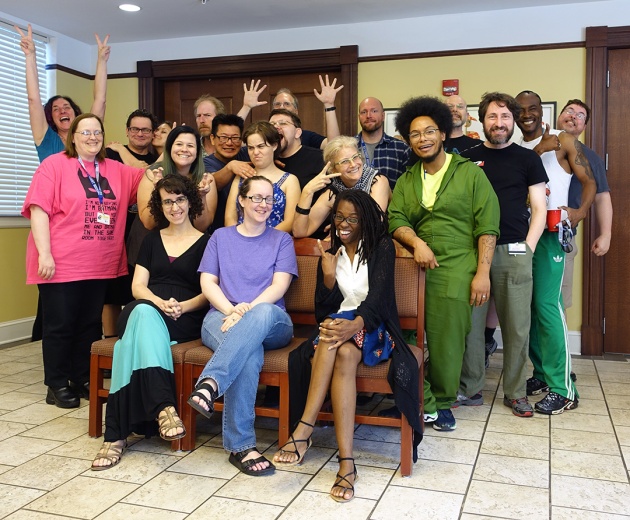 Two workshops were held during the two weeks, one for short speculative fiction and one for novel writing, so we all got to hang out which was great

The workshop well-run, well-thought-out, and exactly what I needed right now to get my writing to the next level–and it was physically and emotionally tiring in ways I didn’t expect.

I’ve not spent two weeks surrounded by strangers since…I don’t even know when. I suppose when I did study abroad right after college. The effort of being congenial 16+ hours day wore on all of us, I imagine. More than a few participants admitted being introverts (though I’d not have known it). I’m somewhere in the middle, but I do need a good amount time alone in places where I can recharge–such as my house or the SomaFM office, or on long walks.

My home for the workshop was a stripped-down, linoleum-floored, twin-bedded dorm room (and this was the nice dorm I later learned). Not a place to relax. The air conditioner startled me awake at night when it kicked on–though apparently I was lucky as in some rooms it didn’t run at all. The bathroom was down the hall and the shower a claustrophobic plastic coffin that was home to a giant, friendly cockroach.

The town of Lawrence is really cute (aside from some run-down student housing). I love to walk and use that time to mentally unwind, but long walks were more pore-cleansing than soul-cleansing in Kansas in the summer. I’d get out in the morning and walk to the library to read (we critiqued five people a day and though I’d read everything in advance I needed to refresh my memory). By noon the temperatures would be in the 90’s with high humidity and the walk back to the dorm was hell. I returned to my room soaked through and had to actually change clothes before our critiques started at 1pm.

The only real recharge time I got was when I rented a bike and rattled my way up and down the brick streets of Lawrence last Saturday. I got to be a pure tourist for a few hours.

The critique sessions wouldn’t have been so exhausting if I hadn’t been trying so hard pay attention and take notes. This was my first ever workshop and I invested a lot into it–both time and money and lost wages–and I was determined to get everything from it I could.

The toughest thing was splitting myself into many different personas so that I could give critiques, get critiques, empathize with others, respect others, take things personally, not take things personally, intellectually agree or disagree, emotionally agree or disagree. Sometimes all at once. All while keeping calm and remaining open. Everyone in the group was so polite and even-keel, it made me suspect they were dealing with the same issues. Or maybe they are just better at it. It was my first time after all.

Midway through week one I thought I’d mastered it. I was upbeat. I’d been through a critique of one of my stories and pretty much agreed with people. I was inspired.

I hit a snag with my next story. We like to think we have thick skins but innocuous words can slip through and hit us where it hurts. Not only that, but even if a story is 90% there (none of mine were), the point of a critique group is to zero in on the bits that need improvement. It is disheartening to hear person after person not “get it,” and to realize the fault is mine, not theirs.

Chris, the workshop leader, had a top 10 list for every one of our mistakes. “Here,” he’d say, pointing to the printout, “Why I hate your main character. Number seven.” 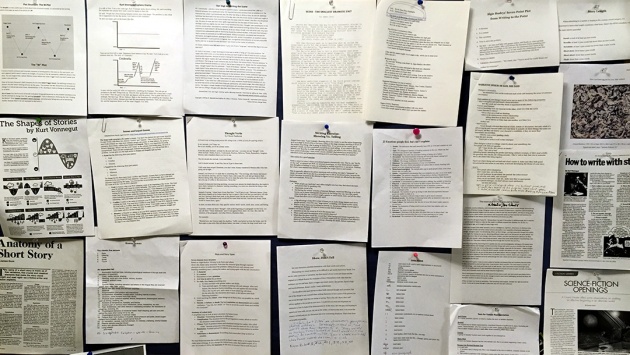 Chris posted the answers to our writing problems

The point being, fledgling writers all make common mistakes. We need to recognize them and learn the “rules” that will help us avoid making them again. All the writers we admire know these rules by heart–and so do the editors reading our submissions. Opens with a dream? No. Passive voice? No.

The rules are to a game, and the game is getting published professionally. We’d best respect them if we want to play. This simple fact was finally made perfectly clear to me, but only after I dropped my ego and stopped arguing. The workshop served me well in that it stripped away all my conceits. My creative work fell short of the mark. Am I going to go away crying (only for a short time) or pick myself up and fix this?

I will fix it. I like to think that’s why Chris picked us for the workshop, even if it was subconsciously. We don’t give up. We will succeed. In his day job he actually does pick winners – for the Campbell awards.

The short days of workshopping were long. After five hours instruction and giving and getting critiques, my brain was totally fried. With less than a ten-minute break most nights, we gathered and walked to dinner together, usually seeing some fireflies along the way (YAY!!). I struck up a conversation with whoever was by my side, often someone from the novelist workshop that was taking place at the same time. 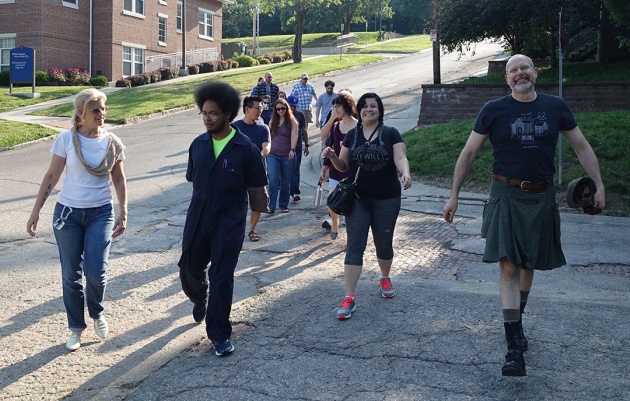 Kij and Chris leading us to dinner

Once I got some food and drink in me I was ready to go again but that mile walk to the restaurant in the heat each night was tough.

After dinner we’d chat, write, or watch a movie together. Sharing space during the day sometimes overwhelmed me, but communal living at night was a treat. I could drift from room to room, floor to floor (the dorm was three stories) and settle in on the periphery of an interesting conversation, catch the tail end of a movie, play a quick game of Russian roulette with a nerf gun…we relaxed at night and I got to know and like my peers.

My peers. It’s a big step for me to say that but I’m going to go ahead because fuck it, I was accepted into the workshop like everyone else. People who’ve been to Clarion and Odyssey and have more pubs than I have fingers. When will this feeling that I’m faking it end? I was paid for a story. It’s in a print magazine. I’m a writer. Not a great writer yet but working towards it.

Thanks to everyone who spent two weeks giving me sharp pokes in the right direction.

M. Luke McDonell is a San Francisco-based writer and designer. Her near-future fiction explores the effects of technology on individuals and society, with particular focus on the growing power of corporations and the associated voluntary and involuntary loss of rights and privacy.
Follow @mlukemc