Sometimes I have a hard time writing a post because I fight with what I want to say vs. what is truly going on in my head and heart.

I wanted to write about how mortified I was by my old blog posts when, years ago, I declared my novel done, or that I was ready to find an agent, or that rules were stupid and stifled my creativity.

Honestly, though, I can’t find the energy to be embarrassed. I might not even be embarrassed. Doesn’t everyone think the first draft of their first novel is perfect? I remember the day I wrote the last line of “Six” in Sugar Lump coffee shop on 24th street in the Mission district. I wanted to stand up and announce it and have everyone cheer. I almost did, and they might have, because people are nice.

Why not enjoy that feeling of triumph? It is a big deal to actually write the first draft. Some people never get that far. I remember chatting with a woman at a literary event and after about half an hour of listening to her blab on and on about her book, I discovered she hadn’t written one freaking word. She didn’t even have the plot figured out. A good friend of mine talks wistfully of wanting to write but being too afraid. He said he’d never show the work to anyone.

So, good for me for being ignorant and optimistic and actually putting way too many words on paper and thinking the thing was done.

The next step was to force my friends to read it. And the thing was HUGE. I later broke it into two books, but this was all of it. My friends are amazing and they did read it and I learned another very important lesson. I’m a pretty self-sufficient person and asking for help at first made me feel uncomfortable, but I knew I absolutely needed it, and what I was asking for would take hours and hours. 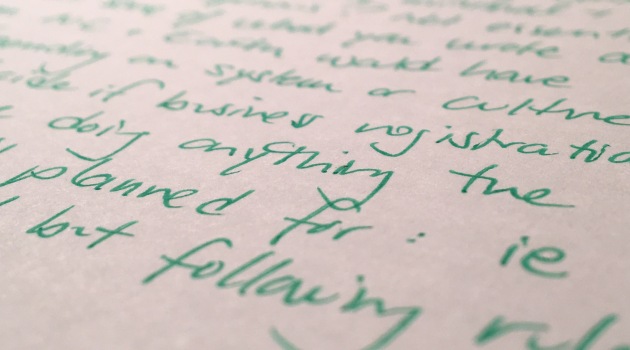 Asking for help and getting it…“owing” a debt, all this made me feel unexpectedly more connected and bonded with my friends. We’re in this for the long haul, and we’ll give and get help as we need it.

It also clarified my goal as a writer: to amuse and delight OTHER PEOPLE. Which meant I had to take their critiques seriously. I’m trying to communicate ideas and if they don’t get it, it’s on me, not them. Though my skin isn’t as thick as I’d like it to be, I’m pretty open to honest responses to what I write. The trick is to decipher the root cause of, “I didn’t like the ending,” which might be a problem with the beginning.

Of course the next step was confusion and frustration. The novel started to look like it might have a few loose ends. Someone pointed out that my main character cries a few times every chapter. In fact, everything was too dramatic. Everyone yelling and leaping around and casting sly glances and adverb-ing.

I started to revise, and also write and submit short stories. The rejection letters trickled in. I got annoyed, sure there was some conspiracy. Whoever read the story was too _______ to get it! I was so annoyed about one of my stories being rejected I googled the guy that read it and, because we can learn way too much about people with zero effort, (which I find scary) I had it all figured out. He was young, and unmarried, and lived in Brooklyn so of course he wouldn’t like a story about an unhappy marriage.

Heh, I’m starting to feel some of that embarrassment I couldn’t muster at the beginning of this. The drafts of stories I submitted at this stage did deserve to be rejected. I forgive myself for this phase, but it does seem crazy now.

The problem with some of the conferences and talks I attended was that, in an attempt to encourage writers not to give up, the speakers outlined the many reasons why a story might be rejected even though it is a perfectly great story. As a beginning writer, I grabbed on to those reasons and held tight, and they prevented me from fixing broken stories. I’d get a rejection and think, “I guess they just accepted another story about telepresence tourism.”

When my friend recently won an award, he thanked his parents for telling him there were things he didn’t know that he didn’t know. That’s what we all struggle with when we start something new, and it’s probably a protective shield that allows us to move forward undaunted. Though, at some point, exuberance isn’t enough and ignorance isn’t a shield, it’s a ball and chain.

Then, thank god, I was accepted into the Gunn Center Speculative Fiction Writing Workshop last summer. A slap in the face just when I needed it–as well as a helping hand. As I detailed in another post, it was very straightforward information about how to write from Famous Authors.

What I hadn’t realized was that there is a difference between developing the thick skin we all need to have to handle rejection–and a deaf ear.

I heard critiques by peers (the same kind of all-over-the-place critiques I give!) and learned time-tested “rules” developed by the masters–given to me by actual masters and not “the internet.” I heard, over and over again (to paraphrase), you have to know the rules before you break them. This time, the rules were curated and given to me by people I trusted.

I understand why I was afraid to open the fire hose of rules when it was just me in the attic with the internet. It’s too much. I’m so thankful for patient, real-life teachers, including my weekly writer’s group.

I’m becoming a better writer and hope to continue to improve. In a few years I’ll laugh at this post, and that’s okay. I’ve got a couple of lame analogies about writing I’ll share. It’s like juggling. I was only doing one ball at first. Now I might be up to three on a good day. Pretty soon I’ll be doing five without even thinking about it. Also, and I’m thinking of this because we’ve been watching the California reservoirs overflow, it’s like water. When I first started writing the story was a raging river and I was a leaf. It carried me and I typed and typed and tried to keep up with no idea where I was going. Now I think of the story as water, and me as a hydrologist. I’ve got the water and I’ve got to control it and decide where it will go, how fast, how deep, how wide, and where it will end up. That’s my job.

M. Luke McDonell is a San Francisco-based writer and designer. Her near-future fiction explores the effects of technology on individuals and society, with particular focus on the growing power of corporations and the associated voluntary and involuntary loss of rights and privacy.
Follow @mlukemc